Hi, what are you looking for?

Monterrey Teams Going in Opposite Directions as End of Season Approaches

TORREON, MEXICO - MARCH 11: Jonathan Orozco of Santos, celebrates after the 11th round match between Santos Laguna and Monterrey as part of the Torneo Clausura 2018 Liga MX at Corona Stadium on March 11, 2018 in Torreon, Mexico. (Photo by Natalia Perales/Getty Images)

Another week of Liga MX action is in the books and the playoff picture is slowly starting to form. The top teams continued to look strong, while others are trying to fight towards the 8th spot.

Take a look at how the teams did in Mexico… After a successful midweek dismantling of Tauro, Club América had another homestand against Club León. It was the usual start for América, as they controlled the pace of the game, as León had difficulties breaking down the backline of América.

It was none other than Mateus Uribe who got América on the board first in the 27th minute, when he put home a left-footed tap-in, thanks to a deflection off of William Yarbrough’s hands.

As possession continued to favor América, Uribe doubled the lead in 68th minute with a long-range blast past William Yarbrough. Even when Paul Aguilar received a red card, they managed to keep Club León off the board with a 2-0 victory. 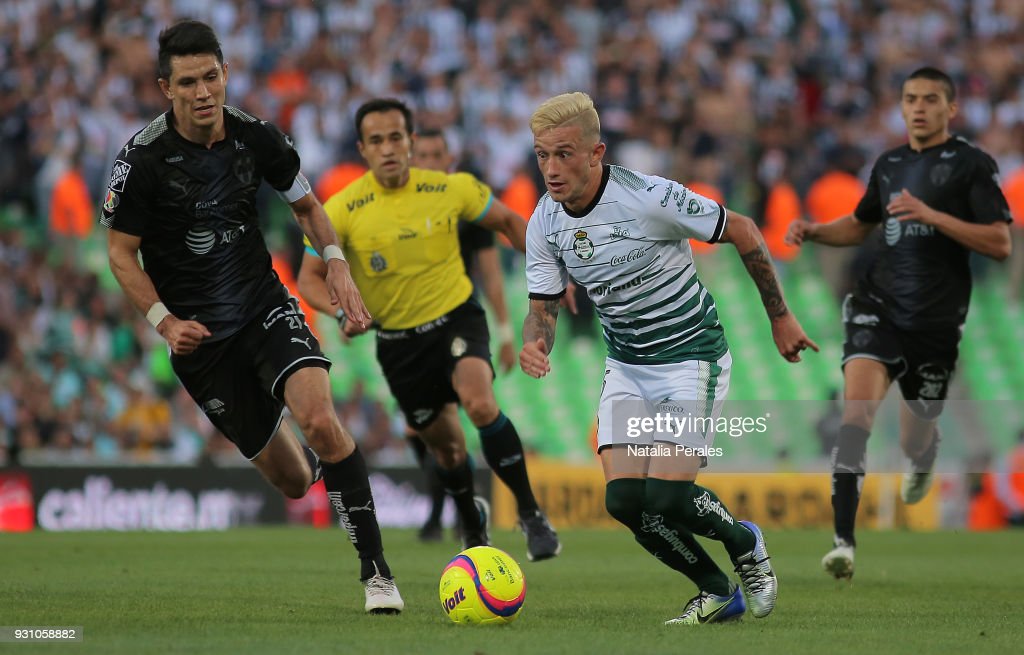 It was the game of the week and it was the last one to be played. Monterrey and Santos Laguna entered as two of the best teams in Liga MX, but one left as the victor. It didn’t take long, though, for someone to get on the board, as Rogelio Funes Mori netted a deflected shot in the 2nd minute to give Monterrey a 1-0 lead.

Santos Laguna didn’t play scared after that goal and actually started gaining momentum until it was rewarded in the 27th minute, thanks to a goal from Jonathan Rodríguez.

The home team wasn’t done, as Julio Furch got them a 2-1 lead just before halftime. Monterrey began to stumble for answers, while Santos Laguna kept the energy high. In the 48th minute, Jonathan Rodríguez added another to his name to give Santos a 3-1 lead.

Santos Laguna ended up giving away a penalty in the 72nd minute but was able to finally collect the three points, as well as the crown of current league leader in 1st place.

The light at the end of the tunnel has finally appeared for Liga MX fans. It was announced that 8 teams have decided to...

Miguel ‘Piojo’ Herrera has seen a lot of success with Club América in his time as manager. However, there is one Achilles heel for...

The Los Angeles Football Club (LAFC) needed to win 3-0 Thursday night to progress to the quarterfinals of the CONCACAF Champions League. An uphill...

Three months or so after the Sounders defeated Toronto at Century Link Field to win their second-ever MLS Cup, the new league season is...

A new era was started in 2019 for the Mexico national team, as ‘Tata’ Martino took control of the CONCACAF side at the beginning...

Tigres once again is headed into the upcoming season with the tag of being a contender to lift the Liga MX trophy. The Nuevo...

Monterrey Teams Going in Opposite Directions as End of Season Approaches

After a weekend of no Liga MX due to the international break, both Monterrey teams are getting ready for the final push this season....