Hi, what are you looking for?

Is This A Sign of The Times For England?

France Are Champions Of The World!

World Cup: Why Croatia Are International Football's Team Of Destiny

Three Lions Roar Past Sweden And Into Semi-finals

TOPSHOT - England's forward Harry Kane (up) celebrates after scoring his first goal during the Russia 2018 World Cup Group G football match between Tunisia and England at the Volgograd Arena in Volgograd on June 18, 2018. (Photo by NICOLAS ASFOURI / AFP) / RESTRICTED TO EDITORIAL USE - NO MOBILE PUSH ALERTS/DOWNLOADS (Photo credit should read NICOLAS ASFOURI/AFP/Getty Images)

There has been excitement in masses since England’s World Cup opening win against Tunisia on Monday night. Of course, this is nothing new for English fans to get head over heals before a tournament’s barely kicked off, but what has particularly got the nation feeling so optimistic?

Gareth Southgate’s men impressed many of us by their razor-light start to the game on Monday night. A flurry of chances were created within the first 30 minutes, something which England teams of old have struggled to make an instant impact at a major tournament. Most notably opportunities were presented to Jesse Lingard and Raheem Sterling, which although they were spurned, did serve the Lions with a lot of encouragement to find the opening goal. And guess who – Captain Harry Kane managed to notch his side ahead in the 11th minute.

The chances kept coming thick and fast, with Keiran Tripper teasing in an onslaught of crosses from the right flank and Ashley Young cutting in on the left with in-swinging deliveries which came close. Somehow the Lions found themselves level-pegging as a dubious Kyle Walker obstruction gave away a gift of a penalty for the Tunisians, which they dispatched. Although England were going into half-time at 1-1, there was much to be proud of.

This was really a game of two halves, with the Tunisian’s snatch-and-grab goal looking like it had rocked Southgate’s men, as they took their foot off the gas and were creating far less opportunities. However, a understated substitution in Marcus Rashford seemed to have restored the determination and hunger which was serving them so well in the first half. Rashford’s energy saw him collecting the ball from both flanks, making neat little one-twos and was clearly trying to press forward with positive play. Slowly England were finding their feet again, though as the match reached the 90th minute mark, it looked as though time was up.

A late surge saw England win a corner, with Trippier whipping in a curling cross, finding the head of Harry Maguire which was directed towards, of course, Harry Kane once again. The Tottenham talisman created space for himself near the Tunisian far post and steered a technically brilliant header home for England.

6 – Kieran Trippier created six goalscoring chances versus Tunisia – only one player has created more in a single World Cup game for England since 1966 (David Beckham, 7 vs Trinidad and Tobago in 2006). Delivery. #WorldCup #Eng pic.twitter.com/NgI3EnZ79L

Something which is really quite uncharacteristic of former England outfits. This was a huge moment for Southgate’s team, not only to take all three points, but to show the World this is an England team which is prepared to keep going until the final whistle, a side with self-belief and willingness. And not only that, but an early World Cup brace for Harry Kane will do the forward a huge amount of good, which should give the rest of the side confidence. 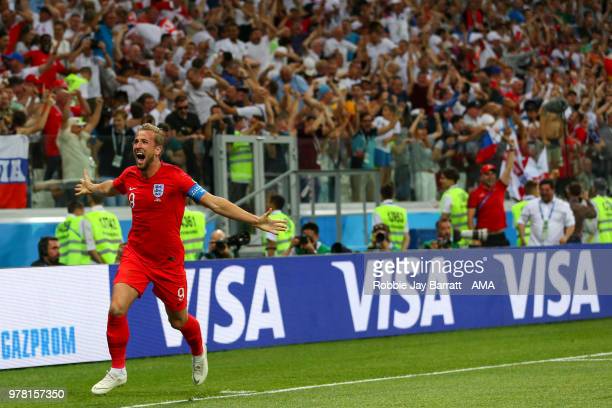 One eye on the knockout stages

So what does this win mean? Well, England are currently in second place in Group G, behind leaders Belgium who thrashed Panama 3-0 in Monday’s other fixture. Both sides are on the same points, but Belgium sit on top with a better goal difference by two. This group was widely expected to be a showdown for first place between England and Belgium, and if both sides go on to win their next games, the fixture on the 28th June will decide which country is the Group G victors. It promises to be a thrilling match-up, with a whole array of Premier League players going head to head.

Can England go all the way and shake off their World Cup hoodoo?

Mexico: Diego Lainez To The U20 World Cup Is The Wrong Decision

A debate stirred up while Mexico played it’s March exhibitions against Chile and Paraguay.  Should Diego Lainez go to the Gold Cup or the U20...

Kylian Mbappe: The Prince Of Football With A Heart Of Gold

Kylian Mbappe, the Prince of Paris, the human Donatello, is a humble man, a simple man, an honest man, a young man, and a...

Belgium beat England by two goals to nil in the battle for third place in St Petersburg on Saturday. Gareth Southgate’s team were unable...

An extra-time goal from Mario Mandzukic gave Croatia a 2-1 win over England to take them to the 2018 World Cup final against France...

Three Lions Roar Past Sweden And Into Semi-finals

Goals from Harry Maguire and Dele Alli got England a 2-0 win against Sweden in the World Cup Quarter-final. Gareth Southgate’s men deserved the...

My initial journey I had my doubts as to whether I would have my Copa América Centenario media credentials approved or not, mostly due...

England beat Colombia 4-3 on penalties after an intense, physical 1-1 draw. Eric Dier was the hero after Jordan Pickford made a showstopping save...